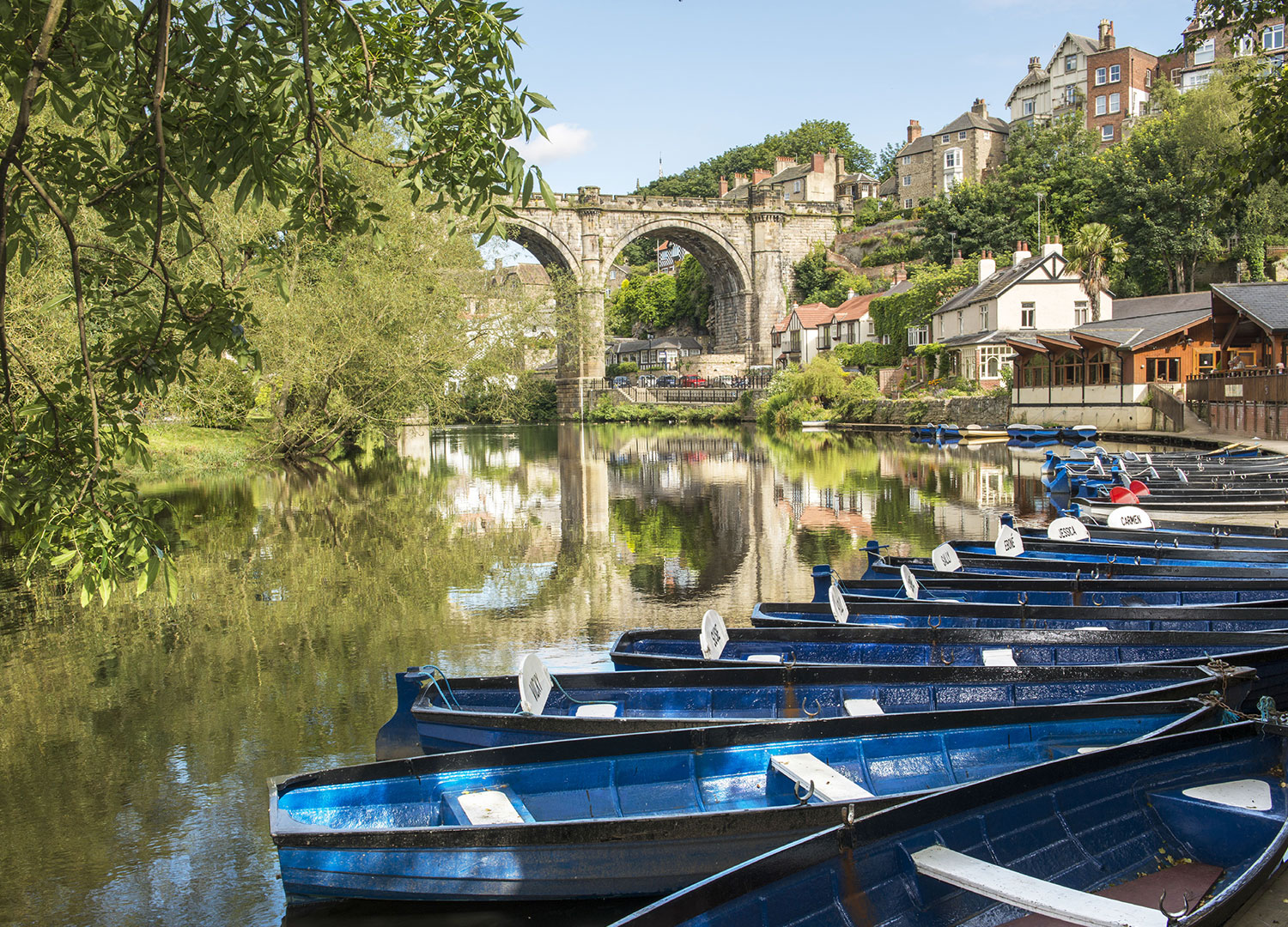 Knaresborough has a lot to offer; commercially, scenically & socially.

Art in the Mill‘s Andy Grinter on why Knaresborough not only creates a good impression; but it’s one that lasts….

So much so, that years after first visiting, people often return due to a strong yearning to relive some happy lifelong memories. If there is something in the air, I suspect it would have been bottled by some budding entrepreneur, no doubt earning a small fortune in the process. However, there could well be something in the water because where romance & matters of the heart are concerned, there’s a long held assumption in these parts that you’re not a proper couple until you’ve been out on the river together.

The appeal has much to do with the dreamy romance of Knaresborough’s Waterside, – the ‘Yorkshire Riviera’ as the locals call it – where a promenade on a sunny day overlooking the Nidd, is quite clearly the place to see & be seen.

Happily the impressive view of the boats with the glorious railway viaduct in the background continues to inspire artists. It seems the scene hasn’t changed much in the 100 years of the boats existence because generations of locals & visitors, no doubt enchanted by the prospect of messing about on the river can be seen  in those iconic green & red rowing boats which have been painted & photographed a zillion times! Nowadays it seems posing for selfies with your other half is a priority for love struck couples who’ll no doubt be pleased to know the local gallery has a selection of prints & originals to remind them of what they missed!

But if rowing isn’t your thing, or you generally prefer terra firma, there are other ways to exert your sporting prowess. There’s the parkrun, one of the most scenic in Yorkshire apparently & there are various cycling routes leading to the Sustrans network & there’s also the 20 mile hike which takes in a few of the surrounding villages en route which is known as the Knaresborough Round.

You can easily combine exercise with heritage & nature if you like though. There are several trails laid out around town waiting to be happened upon, including the Town Windows, the Civic Society’s Blue Plaques & the Milennium Trail, which as it happens between them, cover pretty much one end of town to the other.

And then there’s the beauty of the carefully tended herbaceous borders & magnificent specimen trees to behold, which generally suit a more sedate pace. You’ll find them dotted about but the best place to start is Bebra Gardens & then head for Conyngham Hall grounds.

If the thought of all of this activity makes you draw breath, maybe the best bet is to pack a picnic & head for the shady riverside spots at Conyngham Hall with its sandy  beaches, woodland walks & wide open spaces. I’m pretty sure you’ll feel like you’re in the countryside whereas you’ll know you’re only a few minutes way from civilisation. It’s as good a place as any to plan your next excursion. 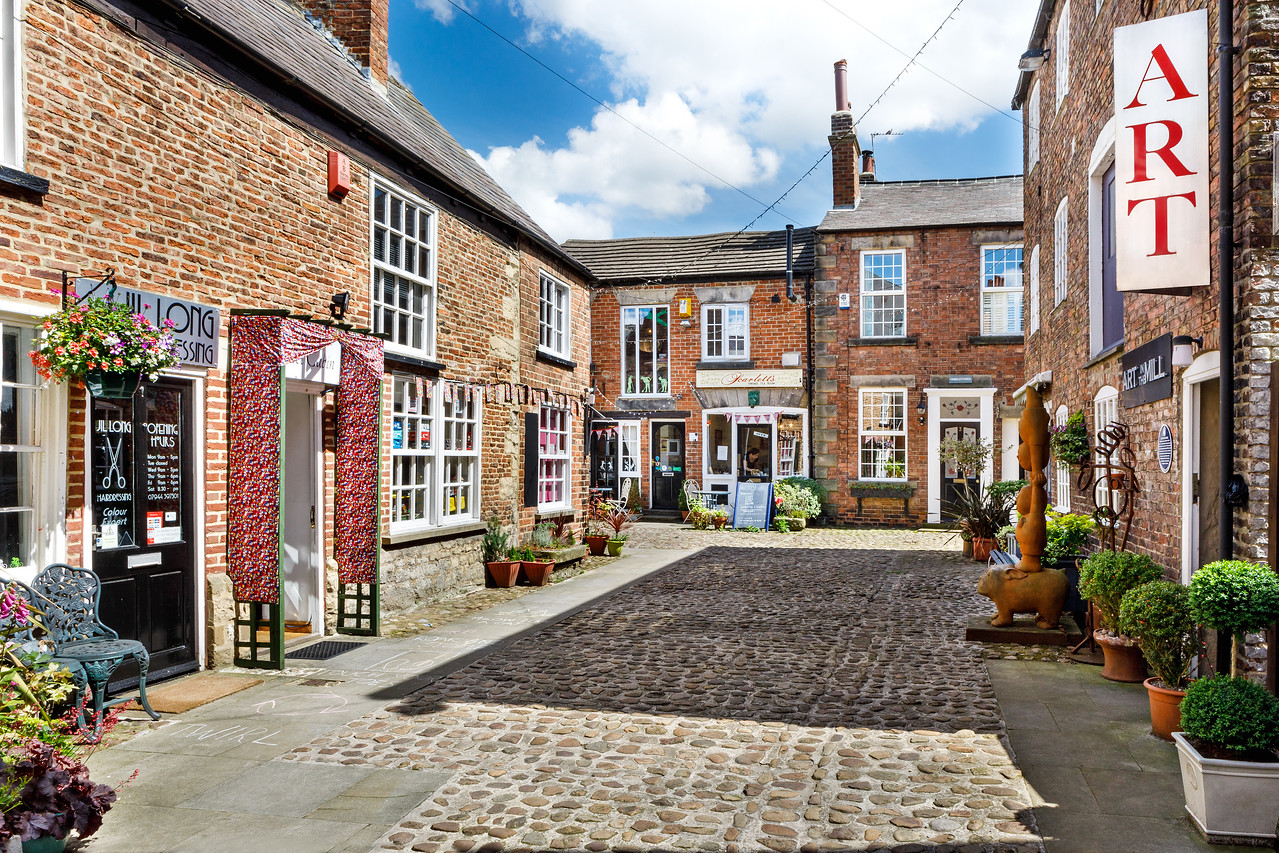 What is it about Knaresborough that creates such a lasting impression? Is it because there’s so much heritage in its bone structure?

If you ever sense an opportunity to go for a wander through the streets of Knaresborough, take it, if only to see for yourself if claims that it’s like walking through the film set of a period drama, are authentic or not.

If that hasn’t enticed you then how about the scenic beauty of a town sitting on a craggy bluff overlooking a lazy river with fields & woods stretching as far as you can see as they undulate serenely on their way from dale to vale.

An enthusiastic tour guide will wax lyrical about how the Knaresborough experience captures hearts & souls. An estate agent will tell you the above average house prices are owing to its good & outstanding schools and of course its proximity to Yorkshire’s ‘golden triangle’. And for companies keen to optimise growth opportunity, being situated in-between York & Leeds on the train, only four miles from the A1M & close to Leeds Bradford International airport offers a distinct commercial advantage!

Furthermore, and perhaps most tellingly, a resident will tell you that Knaresborough ticks a lot of boxes on a hometown wish-list:

But What would a local business owner tell you?

Today, the business & employment landscape in Knaresborough is evolving & innovating quickly.  If you take a look around the local business & technology parks & purpose built facilities, you’ll find anything from a Queens award winning furniture design & manufacturer to a leading manufacturer of space-saving design innovations in the storage & handling industries, a centre of excellence in Modern Method Construction in the housing industry. Slightly further afield there’s one of the largest commercial nursery businesses in Europe & also the UK’s largest landscaping supplier. Then there’s a company with an award-winning Bee Friendly Farm scheme creating new bee habitats on its free range poultry farms & the Royal Warrant holder to Her Majesty The Queen for flagmaking.

As a strategic trading post with a hard-grafting ethos, Knaresborough has always been attractive to a different type of entrepreneur; someone who values a place with an independent spirit. Contemporary Knaresborough is on the brink of new growth, which will bring development and opportunity, propelled by our forward-facing business community across our town centre & business, technology & retail parks.

The great thing is whether we live, work or play in Knaresborough, we’re all part of a fabric that has been woven into an expanding economic & social tapestry, capable of supporting growth & creating opportunity.

Find out more by contacting Knaresborough Chamber of Trade http://www.knaresboroughchamber.org 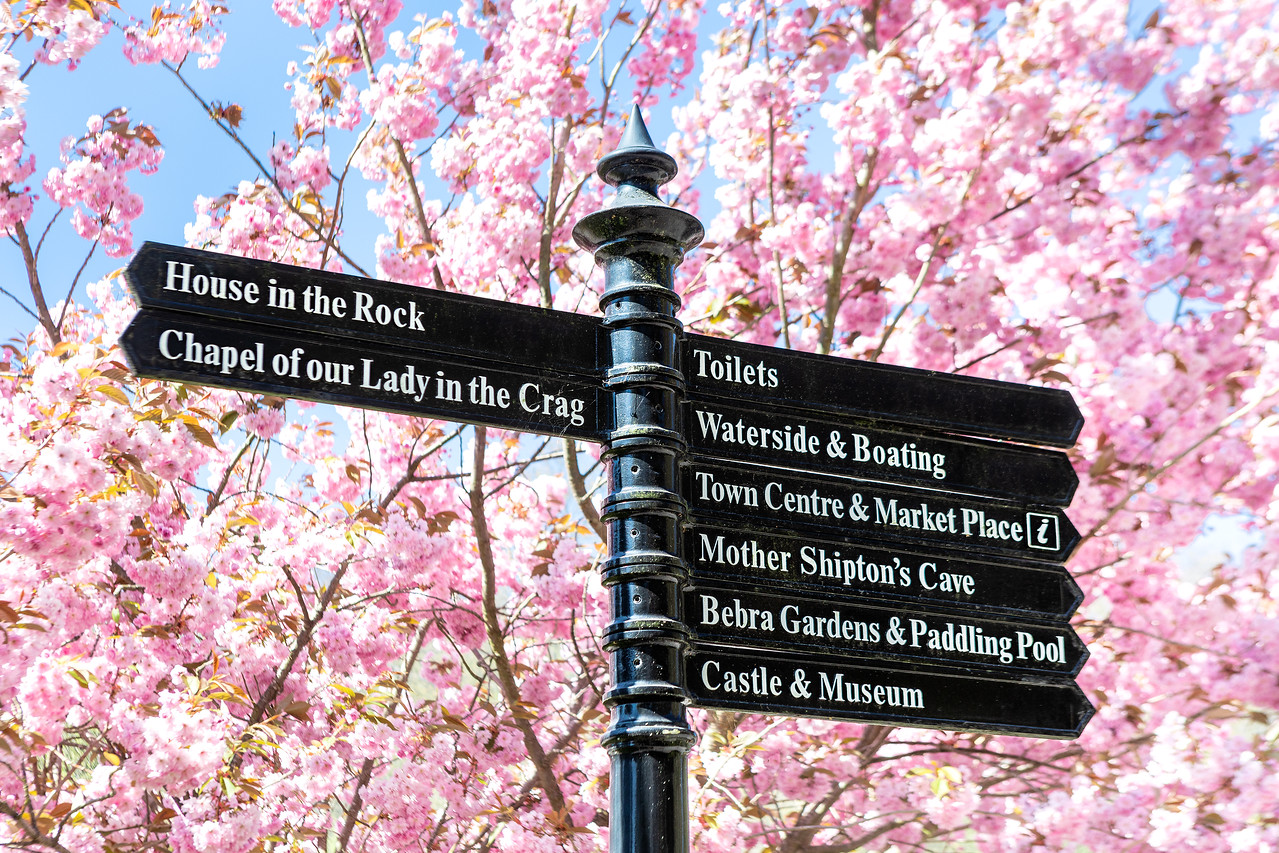 Quiz time! Do you recognise this town from its description?

“…a warren of medieval streets & stone staircases that weave their way up & down the hill.  The town centre is perched on the cliffs above the river & the imposing railway viaduct across the gorge offers an amazing view to passengers”.

Well this brief description is likely to jog the memories of those who’ve visited this town, but for everyone else, the answer to the quiz is of course the town of… Knaresborough, which is one of six towns making up the distinctive borough of Harrogate, in North Yorkshire.

Interestingly, Harrogate has almost 100 springs, and was the first place in Britain to be associated with the term spa. It subsequently adopted the motto Arx celebris fontibus, which means “a citadel famous for its springs”, but despite being described as ”the English Spa” as long ago as 1596, it never quite officially adopted the name ‘Spa’.

Knaresborough is like a prestigious relative living four miles down the road from Harrogate. It earned royal status over many years by dint of its hunting forest & reputation for high quality linen manufacture & although the regal associations are long gone, the legacies live on & one immutable above all others, is the river Nidd. Whether it’s a playground or focal point, its glassy waters descend gracefully on Knaresborough by weaving serpent like through an ancient gorge.

As it caresses the town beneath a craggy bluff, it briefly flurries over the weir & exits soulfully alongside mystical waterside caves, the river leaves a lasting & memorable impression.

There’s no doubting the romantic appeal is due to its lasting & memorable impression and whether you’re travelling over it, rowing on it or standing above it, you’ll realise just what a strong yet benign influence it has.

Of course, with a river you don’t just get water, you constantly stay connected with the past & for as long as some families can remember they’ve grown up listening to tales of unique water pageants & Bed Race crossings, of the boat cafe & penny ferries, of magical wells & saintly residences from times gone by.

And talking of time, there is in the heart of Knaresborough under the clock-face of the parish church a constant reminder of what a priceless commodity it is. It’s where you’ll find the words “redeeming the time”. For hundreds of years, this has served to remind everyone, that each season & moment of time presents an opportunity & it is our responsibility to make the most of it. In other words we’re all given time to spend, but it’s a currency you can only spend once. Pleasingly, the evidence suggests time has been spent well in Knaresborough, & while each one of the borough’s towns & villages contribute their own narratives to the district’s social & commercial history, Knaresborough’s resonance is clearly a valuable & distinctive asset to the local community & wider district.

Commercially, scenically & socially Knaresborough has a lot to offer….. 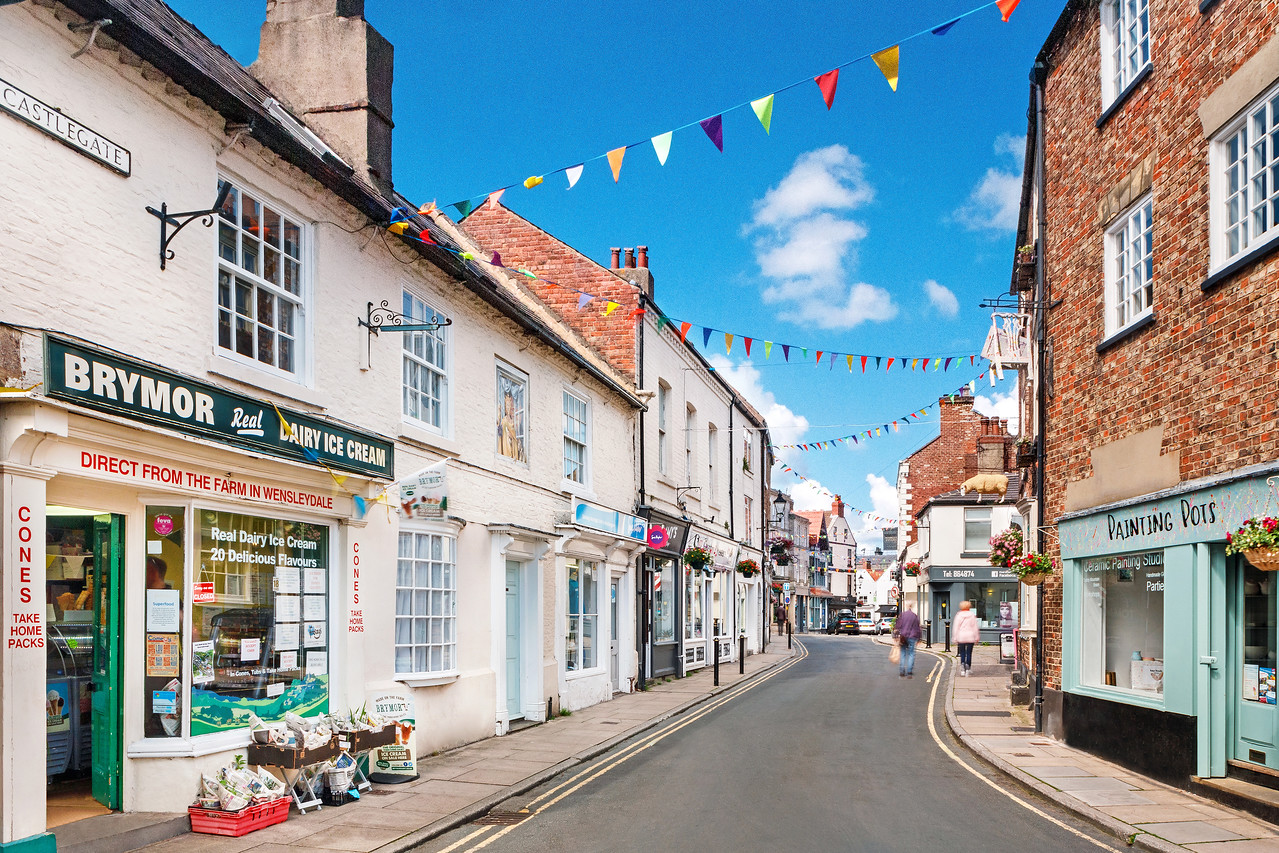